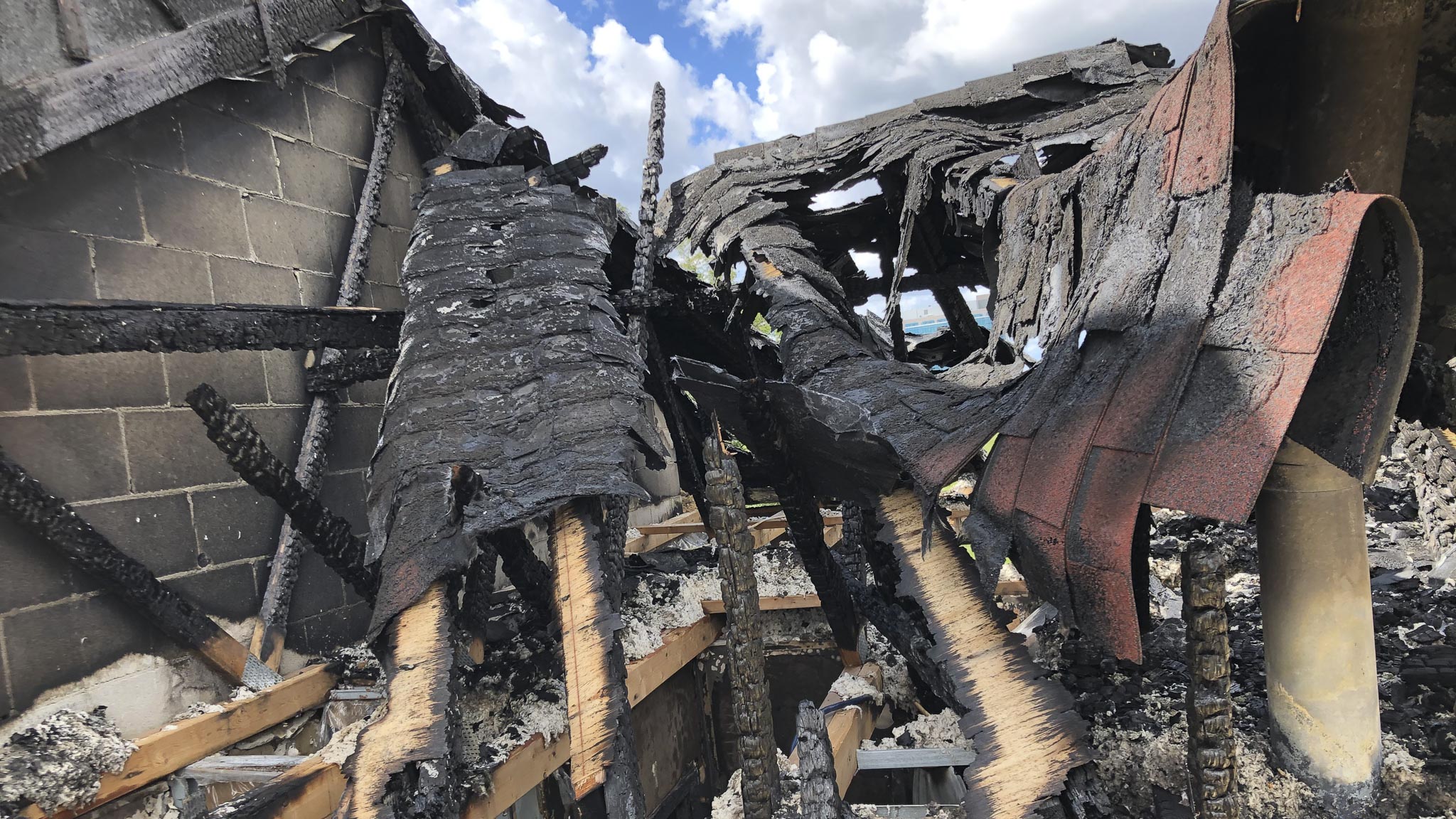 Building fires are among the most threatening life safety incidents. With buildings that include multiple occupancies and uses, there are endless possibilities for the start of a fire that has the potential to travel through the entire building and put all the occupants in danger. Fire separation and protection requirements in building codes are intended to delay the spread of fire and the collapse of structural members, allowing occupants enough time to exit the building safely before rapid fire spread.

The National Building Code of Canada (NBC) design requirements for fire protection are largely based on lessons learned from property fires and disastrous conflagrations in the 1900s. These incidents shed light on deficiencies in the design and construction of buildings and the extensive use of combustible materials and resulted in the large loss of lives during fire incidents (CWC 1996).  Among the major conflagrations that shaped the NBC are the 1927 Laurier Palace Theatre Fire in Montreal (Montreal Gazette, 2019), the 1942 Cocoanut Grove Night Club Fire in Boston (Moulton 1962), and the 1946 Lasalle Hotel Fire in Chicago (Grossman, 2016). The design deficiencies revealed by these major fire incidents include:

One of the paramount objectives of the NBC is maximizing public safety during a fire incident. Public safety is greatly enhanced when occupants are immediately notified of the fire by an alarm system and are given enough time to safely escape the building through visible and easily accessible exit corridors. The fire-related public safety requirements of all building codes are intended to reduce the probability that, as a result of the design or construction of a building, a person in or near the building could be exposed to a high risk of injury caused by:

A building must be protected from significant damage by fire. That is, a building must remain standing long enough for occupants not to get injured by collapsing floors and walls while fleeing from the fire. Therefore, one of the main building code requirements is to reduce the probability that, as a result of its design or construction, a building or adjacent buildings will be exposed to a high risk of damage due to fire. This is achieved by mandating that critical building components meet minimum fire ratings.

To achieve the objective of fire separation and protection, building codes adopt three types of ratings: Fire-Resistance Rating, Fire-Protection Rating, and Flame-Spread Rating. If an element of a building meets the minimum Fire-Resistance rating or Fire-Protection rating requirements of the code, that element is described as a Fire-Rated element.

To slow the spread of fire from one major occupancy to another and delay the collapse of the building, fire-rated assemblies for walls and floors are required when there are two or more major occupancies in one building – either above or below each other or adjacent to one another – and when there are two or more separate units/suites in a building. These units could be of the same occupancy but have different owners or separate tenants. See infographics below demonstrating some of the fire-resistance and protection ratings required for a mixed-use building and a townhouse (residential building with more than one unit). 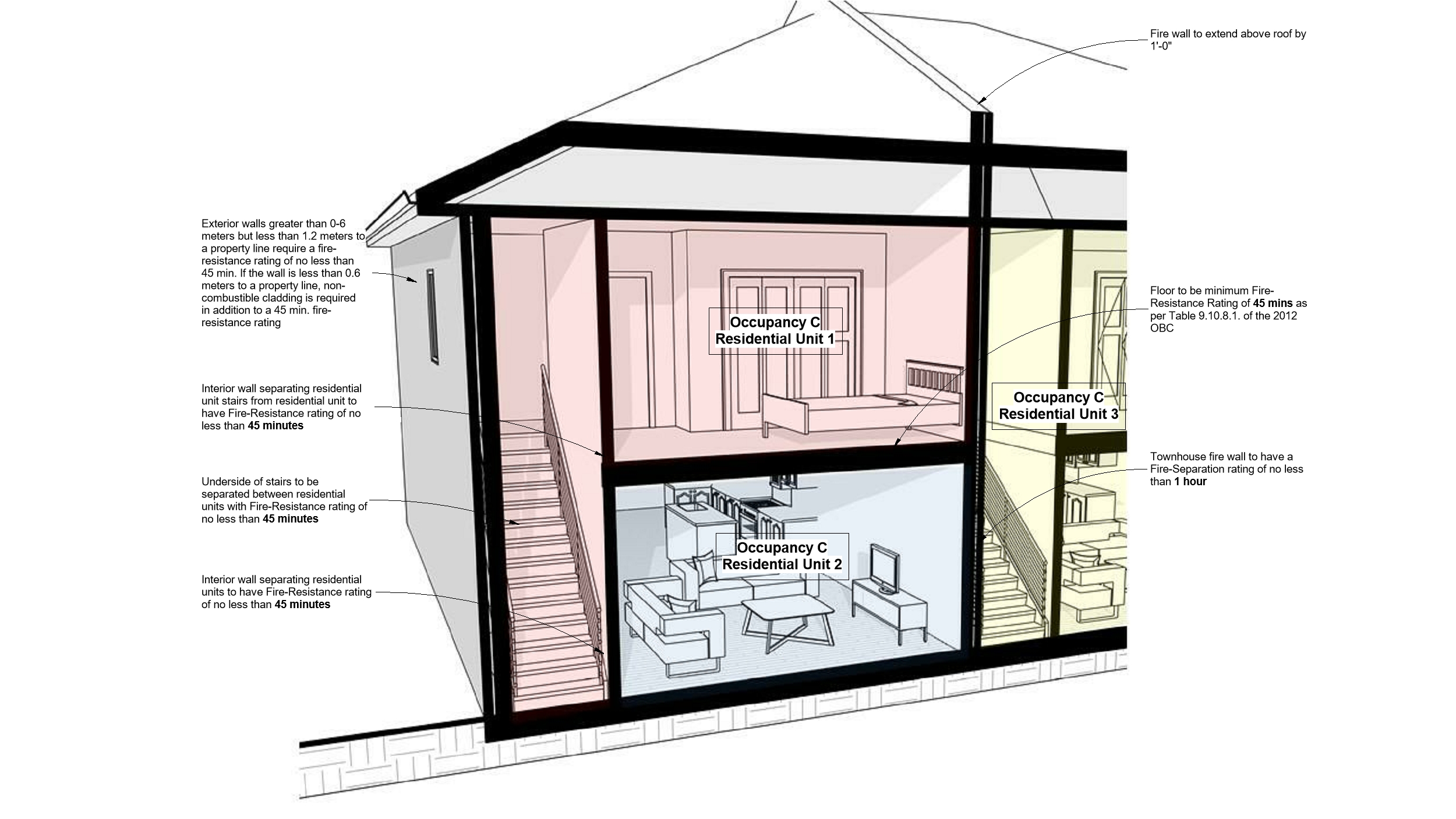 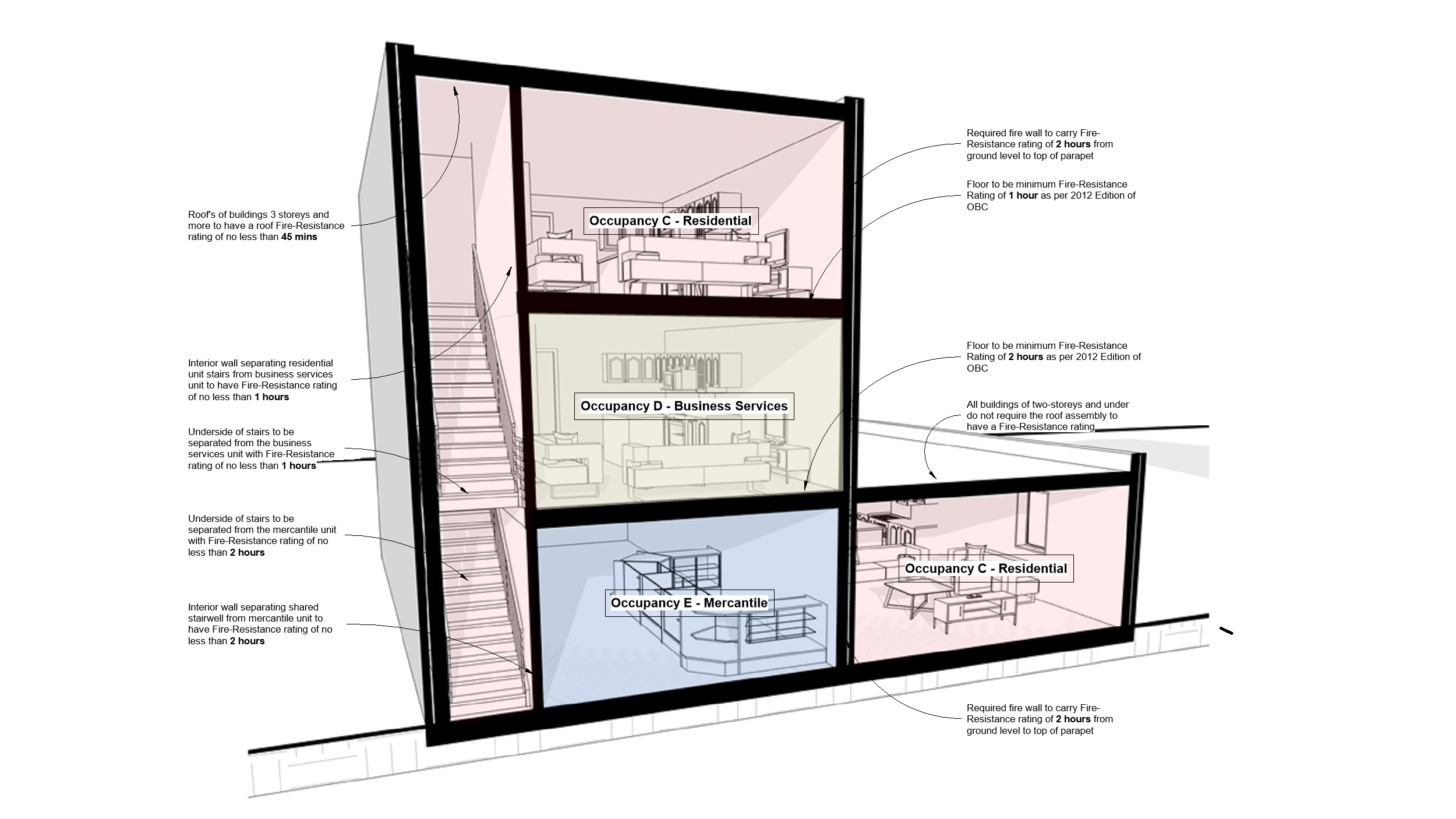 A firewall is a special type of fire separation assembly commonly constructed of non-combustible materials that subdivides a building or separates adjoining buildings. A firewall is the ultimate defense against the spread of fire.  It must be able to withstand the impact of a fire and prevent further fire spread by containing it to one side of the wall until the fire burns itself out or is extinguished. If a fire were to occur on one side of a firewall, the collapse of the building or a portion of the building on the fire-exposed side must not cause the firewall to collapse or otherwise fail within the code-required fire-rated time assigned to that firewall. Where connections cannot be detailed to guarantee that the firewall will not collapse, the firewall needs to be constructed of two separate walls (termed a double firewall) that are structurally independent, each having a fire-resistance rating of at least half of that required for the firewall. The intent is that even in a severe fire, causing part of a building to collapse, a firewall will remain standing to prevent the spread of the fire. The need for structural integrity during the fire event is an important distinction between the building code requirements for a firewall and for a fire separation.

The primary objective of the fire protection requirements in all building codes is to prevent the collapse of buildings in the event of fire and to limit the spread of fire throughout the building – or to other buildings – long enough for occupants to escape and for fire services to respond. Fire protection is significantly important in buildings with multiple residential units or buildings with multiple occupancies, allowing all occupants to be protected from potential fires and fire hazards in neighbouring units and occupancies. These ratings are important to understand, as the issuance of building permits can be denied if a project does not meet the minimum fire protection standards.

Benjamin is an architectural technologist with experience preparing formal engineering plans, drawings and procedural documentation. He has created conceptual drawings and renderings for renovations, additions, new construction projects and the rebuild of damaged buildings. Ben also has extensive knowledge of Ontario Building Codes and has coordinated with contractors, design professionals, district staff and city inspection authorities on various projects.

Yasser specializes in structural forensic and litigation support investigations and has performed close to 1000 investigations to date. Throughout his career, Yasser has applied his unique combination of laboratory and field experience to identify the cause of structural distress and failures for institutional and commercial facilities, Part 9 buildings and parking garages. His engineering practice spans more than 30 years, and he is a licensed professional engineer in Ontario, Alberta, British Colombia and the State of Michigan. An expert on green building, Yasser is also a LEED® Accredited Professional. This accreditation signifies Yasser’s expertise in providing sustainable engineering solutions that minimally impact the environment. Yasser is a lifelong learner and became recently certified as a Project Management Professional. Prior to joining Origin and Cause, Yasser taught structural analysis and design courses at the University of Alberta as an Associate Professor and provided forensic engineering consultancy services in Alberta.